Congratulations on your completed Captain Rollo fishing trip, we hope you had a great time spending the day on the water learning about marine resources and catching fish!

Captain Rollo would like to know how you enjoyed your day and ask you a few questions about what you learned on your recent outing. Fill out the questionnaire and be entered into a monthly drawing for a great prize! 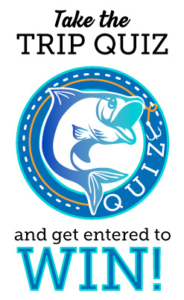 Check out your trip photos! 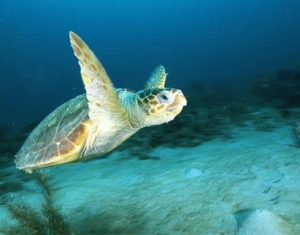 Loggerheads were named for their relatively large heads, which support powerful jaws and enable them to feed on hard-shelled prey, such as whelks and conch. The top shell (carapace) is slightly heart-shaped and reddish-brown in adults and sub-adults, while the bottom shell (plastron) is generally a pale yellowish color. The neck and flippers are usually dull brown to reddish brown on top and medium to pale yellow on the sides and bottom. 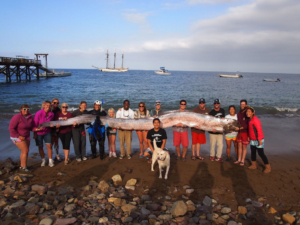 1. The oarfish is the world’s longest bony fish.
Giant oarfish are the longest known living species of bony fish, reaching a length of 56 feet (17 meters). They can weigh up to 600 pounds (270 kilograms).

2. Giant oarfish tastes like gelatinous goo.
People have tried eating them, but “their flesh is flabby and gooey,” according to a NOAA website.

3. Giant oarfish eat tiny plankton and aren’t dangerous.
Although oarfish were likely the source of many historic tales of sea serpents and sea monsters, they are hardly dangerous to people. Oarfish feed on tiny plankton.

4. Oarfish lack scales.
At the surface their skin is soft and easily damaged.

5. Oarfish have been said to forecast earthquakes.
In Japan, oarfish have long figured into folklore. According to traditional belief, if many of the fish wash up, it may signal a coming earthquake.